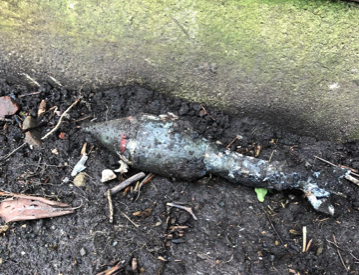 Aram Mahmoud found the item while putting fence posts in for a house on Bradford Road, and said he recognised the explosive instantly due to growing up in Iraq. Mr Mahmoud said: “We were putting up concrete posts and we were digging and we found a rocket. “We called the police immediately and they came round. “I knew it was a rocket because I’m from Iraq. We ran off from there and we found a bomb here instead.”The bomb disposal team told Mr Mahmoud that the device was “very very dangerous”. Bradford Road was closed between Green Lane and Bishops Road, and Oakleigh Avenue was also shut off with residents evacuated. Both roads have now reopened and the police have left the scene. theboltonnews.co.uk