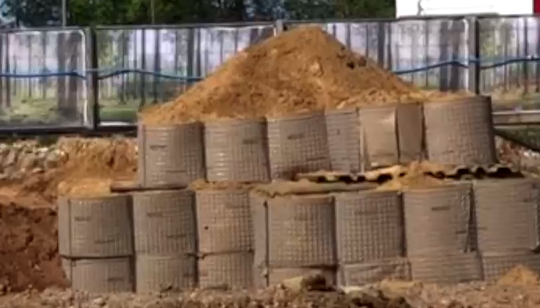 The British Army have shared footage of a German World War Two bomb being safely detonated after it was discovered in a Kings Hill building site. The bomb, which was dropped by the enemy airforce, was found last week in Warwick Way, the site of a former wartime airfield, called RAF West Malling, with nearby streets sealed off for the controlled explosion. Corporal Steven Sharp is in charge of the Maca Troop, 29 Group Support Unit, a team of eight which provides military aid to civilian authorities. The squad used Hesco Bastion, typically employed for military fortifications and made out of collapsible wire mesh and heavy duty fabric liner to build a “mitigation structure” which surrounded the bomb. Some 300 tonnes worth of sand was then poured into the Hesco Bastion. https://www.kentonline.co.uk/malling/news/watch-the-moment-ww2-bomb-is-blown-up-227195/